Strength In The Survivors


WARNING: Triggering possible for anyone who has experienced sexual assault. 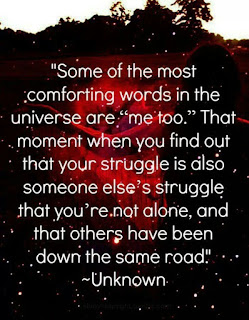 The dark clouds hung deep in the sky as the young woman ran to her car.  Her hands shook as she fumbled with the keys, rushing to open her door.  She put her car in reverse and sped out of the parking lot, wanting to put as much distance as she could between her and that man.

Her eyes wet with tears made it difficult to see the road in front of her, but she kept driving.

Nothing would ever be the same.

The night was supposed to be perfect.  She had worn her best outfit.  The light blue blouse that electrified her sky blue eyes.  Her strappy three inch black heels with her dark denim jeans.  Her hair had fallen elegantly around her face, creating a flawless look.

She had been ready to date again.  Her brother had set her up and she trusted his judgment more than anyone else.  The young man attended her home church and she had met him after she came home from school for the summer.  He had been charming and sweet and had asked her brother to set them up.  It felt easy.

Her friends were excited to hear about her date and asked that she come to their house afterwards.  She told them she would call them when she was done.

She was meeting him at his apartment, back at the local college campus.  He had moved out of his sister’s house a few days before and was still getting settled.  Plus, she would be heading to her friend’s house afterwards.  Meeting him seemed to be the better choice for her.

As she flew down the road, doing her best to not get pulled over, she felt grateful for her decision to meet him.  She needed the fast getaway.  She would have been stranded without her car.  He was that much of a monster.  He was not the person he pretended to be.
She wanted to forget.

She wanted to erase the memory of the night.

His sweet words, as they turned into vile garbage.  His gentle hands, as they grabbed her and became vices around her arms.

She wanted her brain to forget it ever happened.

But the thoughts kept racing through her mind.  They were ingrained in her soul.  He had taken something from her tonight and her heart ached for the loss.

His face had changed.  He had been laughing and joking and then his expression was hard and serious.  He kept joking, but they were mean and vicious jokes.

He told her she was going to enjoy it.

She had cried.  She had pushed on his chest and yelled “no”.  She had hit him in the shoulder, hoping to move him just enough.

The punch had to have hurt.  At least a little.  But he did not even grimace.  He only laughed.

The tears flowed.  She could not stop them.

He laughed again and told her to get up.

Her body shook as she glared at the back of his head, watching him walk out of the room.

She had never felt this much hate in her life.

Somehow, she made it to her friend’s house.

She told them it was her fault as she cried in their driveway.

She told them she should have tried harder to stop it from happening.

They listened.  They cried with her.  Then they hugged her tight and told her it was not her fault.

She did not believe them.

She could not face them.  She could barely face herself.

Until a friend said, “What if he does it again?”

Her parents cried when she told them.  Her dad went to the police and had her go into meet with them.  She felt guilty as she told the detective her story, feeling he was silently judging her.

She was a slut.

She had it coming.

She must have wanted it.

Worst of all, nothing happened.  He claimed it was consensual and the police closed the case.  There was nothing she could do but move on with her life.

Except moving on felt like dancing with weighted shoes.

I wrote this story seventeen years ago.  It was part of a research report I wrote for an English class in college.  My professor was so moved by my paper that he pulled me aside and advised me to keep writing.  He encouraged me to build awareness for women who have suffered through the trauma of rape.  He urged me to be a voice for women and even men who have experienced this violent act.  He then peered into my eyes, as he held back his own tears and said, if this story was based on someone’s experience they should go talk to a professional and get the needed therapy.

This story happened to me.  It is part of my journey.  Although I have healed from this moment in my life, I had an excellent support system.  I had people in my life who did not give up on me.  Not every person who experiences this trauma has the same support system.

I watched Lady Gaga’s music video “Til It Happens To You” and I was triggered.  Not in the way I would have been triggered eighteen years ago when this happened, but it still brought on an array of emotion.  I was that woman curled up in bed, not wanting to be a part of life any more.  I was angry and scared and sad and I did not know how to deal with it.

My mom was my hero in those moments.  She did not let me slip away.  With her tough love she created a space where I could crawl out of my hole and greet life again.

Thank you Lady Gaga for putting into music what so many of us feel inside.
I hurt for anyone who experiences rape.  This violence steals away an innocence and freedom you did not know you even had.  The doubt in yourself and in others is exemplified.

No one can understand this pain unless they have been through it.

I have come a long way since this moment in my life.  I am no longer that scared twenty year old, who laid in her bed and cried herself to sleep night after night.  I am no longer distrusting of every man I encounter, although I think I will forever have a wall up until I believe someone is safe.

I am no longer a victim.  He stole my power for a moment, but I was able to stand back up and take my power back.

I am a survivor.

I want to believe he became a better person.  He knows what he did.  He told people what he did.  It did not take him long to brag about it to the wrong people.  They had my back and I will forever appreciate their loyalty and friendship.

I know that feeling of loss.  I am a voice for these people.  These girls and boys, women and men who experience this violence.  It is not the end.  It may feel like the end, but it is far from it.  Hold your head up high and do not give the fool your power.

The violence has to end.  Power over another is not the answer and it only shows how damaged that person is.  Get help before you make the mistake and cause a damaging ripple effect into someone's life.

Out of all of this, out of my whole story… I have to say, YOU ARE NOT ALONE.  There are people out in the world who will stand beside you.  Friends and family, but even strangers.  People who have been there.  AND people who have not been there, but would protect anyone who has been there.  You can choose to NOT be a victim.  Instead, stand up and stare this crime in the face.  Do not allow anyone to rip your power from you.  As damaging and heart wrenching as this violence can be, a person can rise above it.  They can look it in the face and say, “YOU CAN'T HAVE ME.”  Find the support, ask for the help and learn to heal your heart and mind.

A BIG thank you to all the people who put together "The Hunting Ground".  I applaud you for raising awareness.  Way to be a hero in mine and others lives.

Labels: empowerment not alone rise above rise up stand together strength survivor take back your power warrior