“To write a book you need a lantern to light the way, a shovel to dig deep and a big, brave heart to make it to the end.” – Joanne Fedler

Recently, I've been stalking a friends sculpting progression, and luckily he’s been making it easy by posting his development on social media for everyone to witness, as he molds it into his final masterpiece. My quick glances at his work changed the other day, when I took a few moments to shuffle through the pictures and was instantly inspired by all the work and love he’s giving his current project. He truly loves what he does.

Books are no different. A manuscripts progress is usually not seen, or purposely shown for that matter, but a writer spends days, months, sometimes years molding their imagination into its final perfection.

I think back to when I first published, Eyes Wide Shut, and in retrospect I realize it wasn’t complete when I hit that submit button and tossed it out to the world to judge. I was a novice writer, still learning the tricks and trades and was anxious to have my words read. I was even more anxious to receive feedback.

For the first month or so, it was crickets in the wind. Nothing was said. And no one seemed to notice the anguish writhing through my stomach, waiting desperately for some kind of shining news. It didn’t come. In fact, the first bit of feedback was that it had its good parts, but it also contained its unpleasant sections. I had to close my eyes, take a few deep breaths and calm the storm raging through my heart. All that hard work and it was just… okay.

I had spent four years shaping this book. Yes, there were months that I didn’t touch it, because life happens and I still had no idea what I was doing. It was just a story at that point. But when I decided to push forward and finish the work, I leapt before I looked. And the crash landing was detrimental to my ego, to say the least.

If there is one piece of advice I could give an aspiring author, it would be, TAKE YOUR TIME. Especially for that first one. Create it, mold it, change it, breathe it in, and LOVE it. Give it your time and love, and then hand it over to an editor and let them do their magic. Yes, it costs money, but they’re worth every single penny. I learned that the hard way.

After a year of suffering through the rejection, I decided to really take a good, hard look at my book and fix it. So, between writing Enyo’s Warrior and all my other daily life tasks, I found the time to rework Eyes Wide Shut. It wasn’t easy and there were times I thought I was losing my mind, but I did it. I finally finished sculpting this book and I’m glad I chose to do so. I slapped a new cover on it, courtesy of Brandon Burgon, resubmitted it for publication and began finding more and more readers over the next year.

Since that time, I published Enyo’s Warrior and Protectors of the Stars, along with a short story in the Shattered Time Anthology. I took the time to mold and sculpt my later books, giving them a huge amount of love, admiration and time, and because I decided not to quit in the face of defeat, I’ve made a name for myself.

Now, my books might not be known everywhere, and people still don’t usually connect my face with my name and writing, but I’ve had my moments of recognition. And let me tell you, when it comes from someone who truly enjoys your writing, it’s a marvelous feeling. 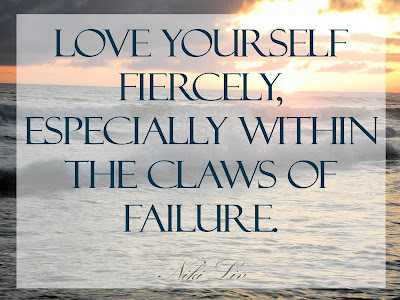 Moral of the story... take your time, love your work, and sculpt your writing into a masterpiece. You will thank yourself for giving your passion the time it deserves.

And if you do fail, don’t be so rough on yourself. I’ve had to learn this the hard way, as well. Instead, take a step back, allow yourself to breathe through the heartache, redirect your path, and start again. Because in ten years, you will look back and pat yourself on the back for not giving up.